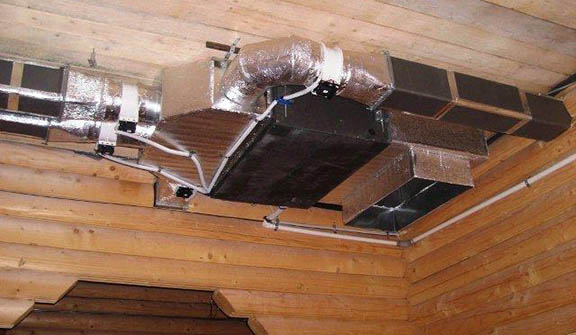 What is an air recuperator and how to assemble it with a minimal budget!
Everyone knows, that good ventilation is the key to a healthy indoor climate. A properly designed and installed ventilation system ensures a constant supply of fresh air to the house and the outflow of used air outside. However, in winter, including exhaust air, valuable heat is radiated to the outside, and cold air enters the house from the street, and the extra energy is spent on heating it.

The principle of operation of a recuperator

Before you start designing a home appliance, you need to understand how it works.

The word "recuperator" (from Latin "recuperatio") means picking up or returning something. The air recuperator is a device, in which by heat exchange – heat is transferred from the outgoing flow, already heated air, to incoming cold air. Thus, heat losses in the house are reduced, which allows you to reduce heating costs.

The effectiveness and economic benefits of installing an in-home recovery system depend on the following factors:

The recuperator is only part of it (and not the most expensive) forced ventilation system. Therefore, also ventilation should be considered as a common system. 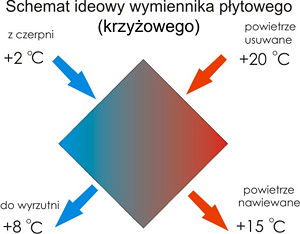 The most commonly used is a recuperator with a plate-cross exchanger. They do not have the best operating parameters, but they are the cheapest. Fresh air from the outside and air removed from the rooms flow alternately between the plates separating them. The supply and exhaust air flows are completely separated. Heat passes through the plates, but for any contaminants and undesirable odors they are a very effective barrier. The disadvantage of cross-flow exchangers is the susceptibility to frosting already at a temperature slightly lower than -5˚C. The frosting process of the exchanger may lead to complete clogging and lack of flow through the exchanger. To protect against this phenomenon, the so-called. a bypass to reduce the amount of fresh air flowing through the exchanger. A fresh air pre-heater can be used instead of a bypass, which heats it to a temperature of at least -5C. This solution reduces the heat recovery from the exhaust air. The efficiency of heat recovery in recuperators with a cross-flow exchanger is achieved 60%. You can raise the efficiency of such a system to 80% by connecting two exchangers in series with each other.

Advantages: simple construction, the exchanger does not require additional energy from outside the system, reliability of operation related, inter alia, to the lack of moving parts, it is possible to adjust the degree of heat recovery of the exchanger using the exchanger bypass

Disadvantages: possible frost even at temperatures around -5 ° C, this exchanger requires external energy during operation, there is a possibility of blowing exhaust air into supply air or vice versa, depending on the actual pressure difference. This entails the occurrence in this exchanger, inter alia, of the phenomenon of diffusion of odors, the presence of moving parts increases the possibility of failure.
it can only recover heat at positive temperatures. 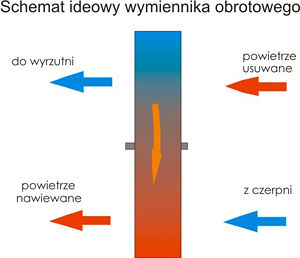 A more expensive solution is to use a rotary heat exchanger for heat recovery. They are in the form of a drum (rotora) made of openwork mass that accumulates heat, which consists of milipore plates and aluminum foil forming a network of channels for air flow. The exchanger is divided into two halves and the warm air removed from the rooms flows through one half, and through the other fresh air, to be heated. The rotor from the exchanger rotates at speed 10 – 20 rotations per minute. The constant direction of rotation allows each channel to be heated first with the exhaust air, followed by intake air cooling.

The big advantage of rotary exchangers is their efficiency reaching up to 80% and even more. The design allows not only heat recovery, but also moisture. Winter, when the air after heating is excessively dry, by covering the exchanger with hygroscopic substance, the air quality can be noticeably improved without the use of additional humidifiers. In the rotary exchanger, the air streams do not mix with each other, as in the cross-flow exchanger, but because the same part of the drum is alternately circulated by both air streams, some pollutants and odors may penetrate from the air removed to the fresh air entering the rooms.

By adjusting the rotational speed of the exchanger, you can change the efficiency and avoid frosting to the exchanger surface. During operation, these exchangers require external energy to be brought into circulation. The use of moving parts, on the other hand, causes the possibility of failure and an increase in the noise level.

Advantages: simple construction, the possibility of obtaining a smooth or step regulation of the degree of heat recovery depending on its design solution, heat recovery to 80%.

Disadvantages: possible frost even at temperatures around -5 ° C,
this exchanger requires external energy during operation, there is a possibility of blowing exhaust air into supply air or vice versa, depending on the actual pressure difference. This entails the occurrence in this exchanger, inter alia, of the phenomenon of diffusion of odors, the presence of moving parts increases the possibility of failure.
it can only recover heat at positive temperatures. 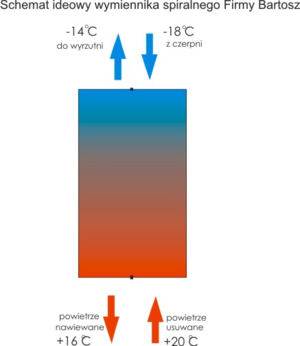 These heat exchangers are increasingly used in single-family housing. They are constructed similarly to the cross-flow exchangers. The difference is in the way the air flows. In counter-flow exchangers, the air streams flow in parallel in opposite directions. Thanks to this, the efficiency of heat recovery comes to 90%. The advantage of this exchanger in relation to the cross flow exchanger is the elimination of the frosting phenomenon.

Air handling units manufactured by BARTOSZ are based on a spiral-counter-flow air-to-air heat exchanger built in the form of a cylinder. The exchanger is made of a special aluminum alloy, and its construction is reserved at the Patent Office.

Advantages: High efficiency of the device - over 85%,
the exchanger is characterized by a simple structure,
it does not require additional energy from outside the system,
reliability of operation related, inter alia, to the lack of moving parts,
it is possible to adjust the degree of heat recovery of the exchanger using the exchanger bypass,
no frost effect even at -30 ° C,
device tightness 100%,
can be used as an element in a duct installation,