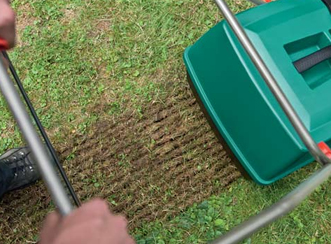 Grass seeds are purchased in seed shops in the form of ready-made mixtures, which most often include fescue, panicle, peppermint and ryegrass. On 10 m2 of lawn you need 30…40 nation day. Seeds are sown in shedding: half going in any direction, and the other half – going perpendicular to the previous one. Planks are tied to the shoes, so as not to make deep marks. The seeds are covered by a shallow raking of soil. If there is no rainfall during this time, the lawn is watered with a highly dispersed stream of water, so as not to rinse the light grass seeds. The seeds start to germinate after a week and the soil must be kept moist during this period, because the seedlings are very sensitive to lack of water. Only, when the grass grows up to
6…8 cm (4…8 weeks after sowing) it is mowed, shortening by 2/3 and rolls with a light roller or kneads with boards tied to shoes. Then it is mowed every 8th…10 days for an amount not less than 3 cm. Mowing less often causes weeds, lodging and rotting of the grass.
On nutrient-poor soils, before setting up a lawn, and every spring, crashes 6…7 dag / m2 of a complete mixture of mineral fertilizers. During the summer, it is enough to fertilize nitrogen in the amount of up to 2 dag / m2 of nitrogen fertilizer every month. The grasses correspond to slightly acidic soils, but when acidification is too much, mosses develop. In this case, some lime is spread in the fall (5…10 day / m2). In turn, too high a dose of lime can cause abundant weed growth. Weed removal is very important, and especially perennial weeds have to be dealt with, such as: dandelion (dandelion), plantain and thistle, cutting their roots deep into the soil with a knife. In the summer, the lawn is watered during drought, and under the trees even twice as much, what in the open space. Airing the soil by rolling a spike roller or pricking with a pitchfork is good for the growth of grasses, which allows more air to flow to the roots. All these quite laborious procedures make, that the lawn is even, dense and intensely green.

Surfaces, which are too small, to put a lawn on them, steep slopes and slopes (where lawn mowing or flower care would be too difficult) or places under the canopy of large trees (where the soil is dried up by their roots and there is shade) can be planted with ground cover. These are low-growing plants, the creeping and turfing nature of growth, not very demanding and sufficiently growing. Cotoneaster grows well in dry and sunny places, cinquefoil and heather, barberry is planted on the slopes, irga, Sabinian juniper and yew, which take root firmly in the soil. The undergrowth under the trees is made of ivy, ungulate, ferns, which perfectly overgrow empty spaces and allow you to save work, because they keep weeds from growing.

The rock garden at the house or on the plot has the character of a rock bed. It is also sometimes replaced by a retaining wall or stairs planted with low ground cover plants. Before establishing a rock bed, the area must be prepared, thoroughly digging the soil and removing all weeds from it. Heavy soils require drainage from 5…10 cm of a layer of limestone crushed stone and a layer of gravel and sand with a thickness of 20…40 cm. Light soils can be enriched by adding peat, leaf or heather ground.