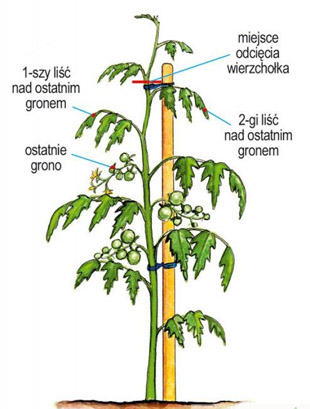 Supports are necessary for some species, e.g.. for high-growing tomatoes and beans. The use of stakes in the cultivation of tomatoes prevents the plants from propagating, the fruit getting dirty and the contact between them and their leaves with the ground, and thus protects them from disease. Wooden stakes are most often used, but you can make a construction, which is made for greenhouse tomatoes. Strong wires or ropes are stretched horizontally on thick stakes, and he attaches vertical wires or strings to them, where individual plants will be led. Plants are run on one shoot, less often in two and tops at the level of the transverse wire. In this way, plants can reach heights up to 2 m.
Topping tomatoes is intended to limit the growth and speed up the ripening of the fruit. This is usually done in mid-August, for the fruit developed later would not grow to the desired size anyway. The main shoot is cut over the last flowering cluster, leaving one or two more leaves above it, which will "feed" him. Topping Brussels sprouts is also recommended, that all the heads on the shoot are of equal size.
Side shoots should also be removed from the axils of the tomato leaves, so that only one shoot grows, which is the most valuable and bears the most fruit. If you intend to lead plants into two shoots, the second is the shoot growing above the first cluster. These treatments limit vegetative growth and stimulate the plant to flower and fructify more abundantly. This applies to high-growing tomatoes, however, it is redundant for determinate varieties.
The purpose of cutting melons is to shorten the main shoot, on which male flowers grow, and stimulation to create shoots first, and then the second row, on which female flowers are formed, fruit-setting