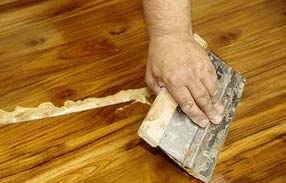 In old veneered furniture, the veneer on larger surfaces is cracked and sticks out from the base. However, such a defect can be repaired. Using the tip of a sharp knife, lightly pry both cracks in the veneer and squeeze a few drops of water into the resulting larger gap. After lifting the veneer edges into the slot, press a small wooden clinic and use a brush to smear the bottom of the raised edges with glue. The still protruding edges of the veneer are pressed with the hammer's hem, squeezing out the excess glue, which we rub with a cloth.

When sticking small broken objects such as wine glasses together, jugs and vials need to skilfully support the foot or other small parts while the glue is bonding. The easiest way to do this is to stick two small rolls of plasticine or glass putty. They are easy to remove after the glue has solidified, as these materials do not stick to glass or porcelain. On the other hand, soft plasticine or putty facilitates the exact matching of the glued parts and the appropriate shaping of the rollers themselves to the desired shape.

Gluing the jug together

When sticking broken jugs or vases together, small parts fall inside when you move inattentively, from where it is sometimes difficult to extract them. It certainly also extends the gluing time. We will eliminate the fall of parts, putting a balloon inside and inflating it. Filling the interior strictly, it will act as a retaining wall for the part. At the same time, no glue sticks to the rubber of the balloon, which we use. Let's remember, to properly inflate the balloon. Inflated too much will make it difficult to fit the glued parts.

Lubricating the wallpaper with glue

The quality of wallpapering is also determined by the even application of the glue, and then proper hydration of the entire sheet of wallpaper. The glue should be applied with a bench brush or other brush with a greater width. To prevent the flank lying flat on the table from shifting and wrinkling, drag the brush from the central axis towards the edges with even movements and slight pressure. A similar method of applying glue is used when using fur rollers of different widths.

Repair of the cistern

When replacing the bell seals in traditional flush cisterns, the water drain must be shut off. It is closed and opened by the movements of a float. Instead of turning off the main valve to shut off the water supply to the system, you can rest a short bar on the edge of the cistern and tie the float to it with a wire or string in the position, in which it will cut off the flow of water from the flush valve. And this position is to lift the swimmer all the way up. A good solution is also hanging on a thin elastic band.

Electrical installation adding splendor to a garden party does not have to last forever, but it should be safe enough, so that it could be left in the ground for longer. Only a cable intended for laying outdoors is allowed, surrounded by thick, rubber jacket. Also, the plug intended for use outside the house must be specially insulated. So that the cable is not a cause of trips and falls, it should be hidden under the stones, between plants in a flower bed or under paving slabs.

The aesthetics of a ceramic tile arrangement is determined by the careful execution of even joints in one, straight line. To determine their width when laying tiles or terracotta, you need to use plastic distance crosses. We place them in the places where all four adjacent tiles meet. The crosses have different shoulder widths to match the typical widths of the joints ranging from 3 do 10 mm. After the adhesive is completely set, they should be removed.

When making structures of wood-based panels, the edges of the elements must be finished in various ways. One of them is sticking the perimeter strip to the intersection. In the case of laminated boards, we stick ready-made plastic strips. When cutting veneered boards, the strip should be cut from the appropriate veneer. In the first case, the edging strip is covered on the underside with a thermoplastic adhesive, so it is glued on by ironing it with a medium-heated iron.