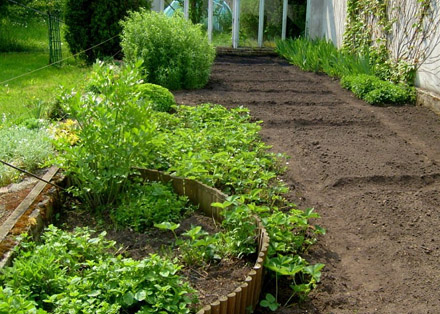 The area designated for the vegetable garden should be dug to the depth of the shovel in autumn. The lumps do not break apart – they will fall apart by themselves over the winter, creating a perfect lumpy structure. If the soil has been cultivated for many years and has a good structure, you can sow plants for green manure in the fall. They are dug up in early spring, when the soil is dry enough, that you can work on it. In the fall, manure or compost is spread.

Most of the soils in Poland are acidic and require liming. The optimum soil pH for most horticultural plant species is within 6.8…5,5 pH. If the pH value is less than optimal, liming should be used. Single dose should not exceed for light soils 10 kg/100 m2, and for heavy soils 20 kg/100 m2 (expressed as calcium oxide). These are large amounts and therefore liming excessively acidified soils takes several years. Lime is not used simultaneously with manure, valuable components of the manure would be lost. Phosphate fertilizers are also spread and shallowly rake in the fall.

The soil dug deep in autumn is too cohesive in spring, so that without the necessary treatments you can immediately start growing vegetables. The first tool, which are used in spring are rakes; they smoothen the surface and crush the lumps. After that, potash fertilizers and part of nitrogen fertilizers are sown (the remainder will be brought in one or two doses after emergence or after planting the seedlings). If multi-component fertilizers are used, the dose is 3…6 kg/100 m2. The fertilizers are mixed shallowly with the soil using a rake and finally the soil surface is leveled.

The best substrate for vegetables is heat, permeable, fertile, deeply cultivated, humus soil. Poor and too light or too heavy soils can be improved by proper fertilization, addition of peat, etc.. However, it is not worth growing cabbage in sandy soil, because despite the greatest hardships, the yields will be low. Tomatoes, however, will grow here perfectly, provided, that they will be intensively fertilized. The climatic conditions and the choice of the site are equally important. In the cool northern and northern regions–in the East, thermophilic vegetables will grow badly: pepper, eggplant, and even a cucumber; it's better to think about building a small foil tunnel for them right away. In turn, in the piedmont and coastal regions, exposed to strong winds, beans fail, pea, lettuce. A piece of advice is to set up a hedge-windbreak made of shrubs or even sunflowers and corn.. In no case should the vegetable garden be shaded by buildings and large trees.

You should also not grow vegetables under fruit trees, which besides that, that they shade, they compete with vegetables for water and nutrients. In this case, close proximity is also dangerous due to the chemicals falling on the vegetables, used for spraying fruit trees.