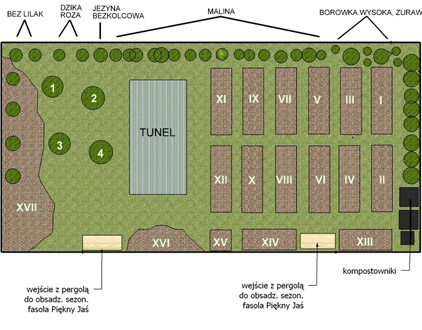 By starting to plot the beds, you must have a cultivation plan in advance. Part of the vegetable garden is dedicated to perennial vegetables: rhubarb, sorrel, horseradish and asparagus. This part is excluded from the crop rotation. The rest of the area is divided into several parts depending on the crop rotation used. The beds should be of the same width, i.e.. such, which allows you to conveniently carry out all work. The most common areas are the width areas 120 cm and track width 30 cm, so that you can reach the middle of the bed without much effort. In small gardens, the width of the bed can be reduced to 100…80 cm, however, with narrower beds there is an unfavorable ratio of the cultivated area to the area of ​​the paths; there is then a waste of land. After measuring the beds, paths are followed along the stretched rope. The height of the bed is then 2 cm, but it can also have a bit more.

In favorable weather conditions, sowing can be started in mid-March. First, these species are sown, whose seeds and seedlings are the least sensitive to cold, e.g.: pea, broad bean, scorzonera, spinach, radish, pasternak, parsley, turnip, onion. In April, carrots are sown, radish, dill, corn, a w maju – pumpkin, squashes, cucumbers and beans. The seeds are sown to a depth corresponding to 2…3-times the diameter of the semen. Shallow sowing is recommended on compact soils and in the case of an early sowing date. It is possible to sow deeper on light soils and at later dates. Furrows, in which the seeds are sown, it is marked with the end of the rake in the plump earth, and after sowing it rakes lightly.

In April, you can start sowing on the seedbed, i.e.. on the pasture, on which the seedling of these species is prepared, which do not need to be sown under covers. It is then sown on the seedbed: savoy and red cabbage, Brussels sprouts, cauliflowers, broccoli, kale, lettuce and various crops. A sunny and wind-protected place is selected for the seedbed. Fertilization is generally not applied, so that the plants do not grow too fast and are not bulky. After the seedling production is finished, the beds are released at the end of May and can be used for the cultivation of peppers or melons..

The seedlings of most types of vegetables are planted, when the danger of frost is over, i.e. after 15…20 May. Only stocky seedlings are selected for planting, well-developed and healthy. The root ball should be large. Before planting, seedlings are watered abundantly either (when no watering is expected after planting) dips the roots in a thin clay paste. The best time to plant is on an overcast day, early morning or evening. Rows are marked along the stretched string. Holes of this size are made in the ground with a stake or a hand, that the root balls can fit freely in them. With the left hand, the plant is taken out of the box or pot and placed in the well, so that the root does not curl upwards. Use your right hand to hammer the peg next to the plant slightly obliquely and straighten it to an upright position, the soil is pressed against the roots. You can also plant with a small spatula or with your hand, especially when the seedling is grown in pots, peat or cardboard, which are not removed.

The planting depth is always slightly deeper than this, on which the plants grew previously. Brassica plants, tomatoes and cucumbers are planted right up to the cotyledons; then they get on well, because they produce a lot of adventitious roots. Other plants with a short hypocotyledonous part, how: lettuce, seler, kohlrabi should not grow too deep. The onion is planted like this, so that only the root bundle is in the soil, and the seasons – as deep as possible, so that they have a bleached "stem". After planting, the plants need to be watered.